Posted on September 29, 2014 by scottalanmills 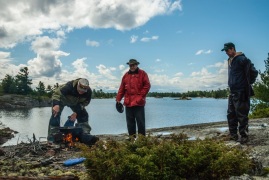 It was time once again for the annual Mills Family Fishing trip to Bayfield Lodge in the Bayfield Inlet in 30 000 Islands area of Georgian Bay. We’ve been coming to this lodge for over 30 years as a group (only 25 for me personally), and the weekend offers so much in the way of memories, that the fishing becomes secondary (note, that’s what guys say when they don’t catch many fish).

This year was going to prove a challenge, as the day we arrived the weather dropped from low 20s, to highs of 14, and we rarely made that. Wind gusts for day one exceeded 40k, and rain was in the forecast as well. All of this assumed we’d get the the water, with my father getting lost, and then breaking his glassed, followed by one boat not starting…it was to be that kind of trip. We soldiered on though, putting some serious time of the water. 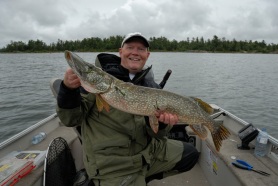 The fishing was as challenging as we expected, with even our “go to” spots being suspect. We managed to boat several bass, perch and a few small pike over the first two days. By day 3 the rest of the group had arrived, and we said goodbye to my brother Chris, who had to attend a stag for our nephew (who books a stag during a fishing trip?). Day three we awoke to torrential rains, so we took some extra time having breakfast and played some cards before we headed out. This is where the perseverance of fishing paid off though, as I was rewarded with a nice 38 inch Northern, who came charging out of a weed back to smoke my spoon. This was my largest fish of the year, and not many people would be too upset with this fish. 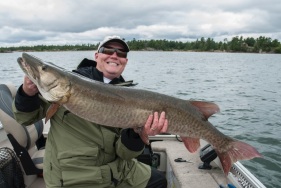 We headed in for some lunch, and then we were back at it when the line got hammered again. I knew I had another big fish on, and I knew it was bigger than the last one. I’ll keep it short, as the fight was a long one, but it ended with me landing a 47 inch Muskie, my biggest fish ever. I know the Musky fisherman out there will say “nice fish, just 3 inches shy of a trophy”, but I’ll take it. This picture doesn’t do it justice, and that’s not a grin on my face, that’s strain! 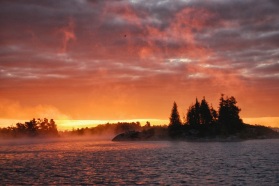 The rest of the weekend was pleasant, and included an amazing shore lunch (see first picture), but the fishing slowed down again and we enjoyed the conversation an fellowship we all look for. Compliments to Brian who got up extra early with Ed to take some sunrise shots, while the rest of us slept. I love to fish, but I equally enjoy just being on the water, and enjoying the scenery of the lakes I fish. How can you not when you see pictures like this?