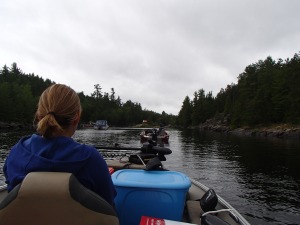 Recently I had the pleasure of spending 3 days at Ellen Island Camp on Lady Evelyn Lake. This lake has 5 outfitters on it, and has been on my list as a potential destination for quite some time. I was further encouraged, and specifically to contact Ellen Island Camp, by Canadian Fishing Guide Mike Borger. One of the reasons Ellen Island Camp was appealing to me is that it offers a housekeeping plan so that I’m able to cook my own meals, which is something I enjoy while on a fishing trip. Dealing with lodge owners Jeff and Jane was a treat, with them being prompt in communication and very professional and accommodating. 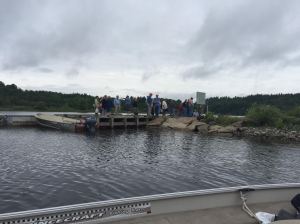 A group waiting to get picked up at Mowats Landing, heading to a different lodge.

One of the special parts of this outing was that it was going to be a nice get-a-way for my wife Carolyn and I. Carolyn will come fishing with me on occasion, including our annual “couples trip”, but this would her first time at a dedicated fishing camp. I really enjoy that Carolyn is willing to participate in my passion for fishing adventures. So after dropping the kids with Grandma and Grandpa in Huntsville, we made the journey to Haileybury, just shy of New Liskeard. We needed a place to stay the night before we went to the lake, and chose the Leisure Inn based on recommendations from Lodge Owners Jeff and Jane. The Leisure Inn provided a clean and comfortable room, parking for my car / boat, and a complimentary breakfast in the morning, and all for a very reasonable price.

One of neat parts about Lady Evelyn Lake is that it is boat only access. The lake is man made, as part of flood control and hydro electric dams on the Montreal River. You access the lake by heading first to Mowats Landing. We made the appx 30 minute drive to Mowats Landing to prepare for departure, arriving to find cars and people everywhere! Each of the five camps on the lake use this location for the pick up, at staggered times. Most people do not bring their own boat, but use the camp boats provided. Because this was to be a short 3 day trip, we decided to bring out own boat. We launched, then tied off waiting for the staff from Ellen Island Camp to arrive to pick up the guests and act as pilot boat for us. It’s always great to use this waiting time to chat with other anglers who are heading in. We spoke with a few groups who have been coming to the lake for 2o years!

Our pick up time was slated for 9:30 and right on cue boats began arriving. In short order people and gear were loaded onto a series of tiller boats, barges and Stanley cargo boats. We made a short trip upriver to the base of the dam, where one by one the boats would be portaged over the dam by a local resident. In a surprisingly short amount of time we were all over and into the main lake. It was about a 20 minute ride to Ellen Island Camp. Upon arrival the staff took all of our non fishing gear up to to our cabin, and we took a few minutes to settle in. Below is a link to a video I shot describing the cabin we were in, and it was dynamite. I’ve been to my share of camps and this was one of the best in regards to the accommodations. 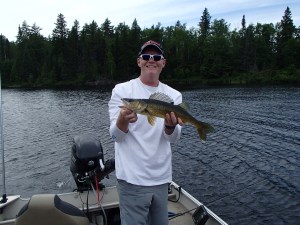 Jeff had provided me copies of maps in advance of my arrival, but once we were settled in he asked us to join him at the dock, where he provided a further full color map of the top section of the lake. These maps are invaluable to anglers on their first trip to a lake. Jeff though did far better, he loaded us into his boat and took us on a tour of the area including showings us many of the spots marked on the map so it would help us with our bearings. Lady Evelyn is in my opinion a huge lake, and you could easily get turned around or fish unproductive areas if you didn’t have this type of resource.

So with our tour complete it was time to head out. We had our first fish in the boat about 5 minutes in, a nice eater sized walleye caught trolling a wind swept shore. I quickly released the fish, thinking there would be plenty more to come…a decision I’d come to regret! What I learned from talking to Jeff and the other long time guests, was that the most effective way to fish the area of the lake we were on, was to drift over large areas marked on the map, dragging jigs or similar along the bottom or just above the bottom, preferably in the weeds.

That presented two challenges for this trip. First off, while I love to jig, I prefer to jig defined structures like drop off, rocky area, islands etc, and not so much weeds. The second challenge is that like most trips, you have to fish a style that everyone in the group is comfortable with. Carolyn not only does she not fish much, but her interest level in learning to jig let alone drift jigging on the bottom was zero. Further, the idea of casting of any sort such as shore lines, weed tops etc, was not on the agenda either :). This trip was 90% about her and I getting away, disconnecting from busy life and reconnecting with each other, so I wasn’t in a position to push the point. So the bulk of our fishing was trolling areas, focusing in on wind swept locations. The conditions were great, if not a bit too much sun, but the wind was up, and darn right aggressive. When I did do some drifting the wind pushed me almost 2 mph in some instances!

So I’ll disclose right now that while we did catch fish, we did not catch nearly the quantity that we should have, nor close to what the other guest we doing. Don’t allow our lack of success to be an indictment of the lake or the camp, this one is a winner. For those of you considering this camp, there are a few more key features for you. There is an excellent screened fish cleaning hut that is well equipped, but if you are not in the mood to fillet fish, not problem because the camp staff are happy to do it for you! The boats were 16 Lunds with 20hp 4 strokes, flat bottoms with fish finders. There is also a recreation building called Charlies Den that had a TV, games, bumper pool and comfy seating. Be prepared to fish a big lake! To put it in perspective I drive a 16 ft Princecraft with a 40 hp, and I was running about 25 mph. It took 20 minutes flat out to get to the camp from the dam, and about 25 more to get to the far end of the lake, and that’s just to top half of the lake. There is a whole other basin yet to explore that is at least as large.  I spoke with one guest who was up for his second year, and he shared his story that the first year he really didn’t get that many fish, but the second year he fished the lake the way it wanted to be fished, and had the luck you’d expect. A return to Lady Evelyn and Ellen Island Camp will have to occur so I can do the same, and experience the fishing this lake is known for.

This entry was posted in General. Bookmark the permalink.